Learn how to make your own pumpkin pie spice in less than 5 minutes with just a few common spices. Perfect for fall cookies, bread, pies, DIY beauty recipes and so much more!

This fall spice blend is easy to make at home! You will never use store-bought again!

Why It’s Time to Make Your Pumpkin Pie Spice?

While store-bought is convenient, it’s nice to make your own blend, to save money, make it fresher, and customize the flavor by simply increasing your favorite spices and decreasing ones that aren’t preferred.

A few years ago, I found myself in the middle of a fall baking marathon and realized I was out of Pumpkin Pie Spice.

My first instinct was to head to the store – but it was so cold outside in and I figured – wait a sec, I bet I can make this myself. And I did and it was splendid.

Let me show you how easy it is to make pumpkin pie spice at home.

What is Pumpkin Pie Spice Made Of?

The most common spices in pumpkin pie spice are:

At the end of the day, cinnamon is one of the most delicious and healthiest spices on the planet. It can lower blood sugar levels, reduce heart disease risk factors, and has a plethora of other impressive health benefits. Use 3 to 4 teaspoons of cinnamon. When shopping you may find two types of cinnamon: Ceylon and or Vietnamese cinnamon. Ceylon is the sweeter, less bitter of the two, and preferable for this recipe.

Ground ginger brings a welcome spiciness and pungency to this homemade seasoning blend. Measure out 1 to 2 teaspoons ginger.

Ground nutmeg creates a calm, and nutty aroma that pairs perfectly with the sweet flavor of cinnamon. Use 1 to 2 teaspoons of nutmeg.

Allspice combines the flavors of cinnamon, nutmeg, cloves, and pepper. It can be used for many purposes that those warm spices are used, or as a substitute for them.

Despite its name, allspice isn’t a universal blend of multiple spices. It is actually the dried unripe berry of the Pimenta dioica tree, which is indigenous to an area of the Caribbean, as well as Mexico and Central America

But I also throw in some optional black pepper and cardamom for even more flavor and a little bite/heat.

How to Make Your Own Pumpkin Pie Spice

Making your own pumpkin pie spice mix costs less than buying a jar at the store. I bet you have all of the spices in your cabinet now: ground cinnamon, ground ginger, nutmeg, ground allspice, and ground cloves. You just have to put them together!

I measure all of the ingredients into a small Weck jar, seal it up and give it a good shake to ensure it’s well incorporated. Then you can smack a label on it and you’re good to go

The ratio of spices is really what makes DIY blends unique. I like to go heavy on the cinnamon, medium on the ginger, light on the clove and allspice, and include some (optional) black pepper for heat, plus cardamom for a floral quality and depth of flavor.

The result is a custom, quick, DIY pumpkin pie spice perfect for all your fall and holiday baking that will stay fresh for up to 6 months!

I guess the perfect pumpkin pie spice ratio is a matter of personal preference. You can easily customize your homemade pumpkin spice mix recipe with 1/2 teaspoon ground cloves.

For a warm, sweet, and also spicy flavor (with a hint of lemon undertones) you can add 1 teaspoon cardamon. Ground dried lemon or orange peel adds a wonderfully fresh, citrusy note.

If you are anything like me, I love giving homemade gifts — the easier, the better.

This homemade pumpkin pie spice blend is an excellent DIY food gift idea and if you browse Amazon you can see that pumpkin spice gifts, and pumpkin spice things in general, are on the rise.

If you put this homemade pumpkin pie spice in a cute mason jar with a printable tag, you’ve got yourself an excellent hostess gift, teacher gift, neighbor gift, foodie gift, or stocking stuffer this holiday season.

Should I use fresh or ground spices for homemade pumpkin pie spice?

The great thing about homemade pumpkin pie spice is you have that extra bit of control over the spice blend. Also, you can make sure to use fresh spices.

I’m sure you already have most of the ingredients in your cupboard, so work with what you have. Just make sure all the spices are fresh. Spices lose their aroma over time and stale spices will never make for flavor pumpkin pie spice.

What can I use instead of pumpkin pie spice?

If you don’t have all the ingredients for the full recipe, you can substitute any combination of ground cinnamon plus the ingredients you do have. It will be missing some of that true pumpkin spice flavor, but it will work in a pinch.

I wouldn’t try substituting for pumpkin pie spice without cinnamon.

Is allspice the same as pumpkin pie spice?

Pumpkin spice is a blend of several spices: cinnamon, nutmeg, cloves, ground ginger, allspice, mace…some combination of these, usually heavy on the cinnamon.

Allspice is made from ground allspice berries, so it is not a blend of spices, it is a singular spice.

For a warm, sweet, and also spicy flavor (with a hint of lemon undertones) you can add 1
teaspoon cardamon.

Lora is the founder of My Organic Life. She writes about herself and her story with endometriosis. After all these years living with pain she realized how to change her entire life...and now she is passionate about clean beauty, organic eats and nontoxic lifestyle.

The form you have selected does not exist.

This site uses Akismet to reduce spam. Learn how your comment data is processed. 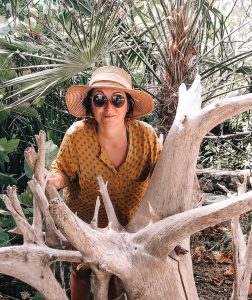